We’ve got a light patch, focusing on champ adjustments this go-round (11.13’s going to have a big chunk of systems work). This means some love for Aphelios and some of his unpopular weapon combinations, and nerfs to Pro outliers (Renekton, Kai’Sa). Then the spotlight’s on everyone’s favorite, definitely trustworthy, definitely purple doctor. His appearance may seem revived, but we’re not too sure if the same can be expected of his patients.

If Mundo doesn’t get you, then we’ll see ya in the next one!

Take this portal to the TFT patch notes where Choncc's already partying in the pool. 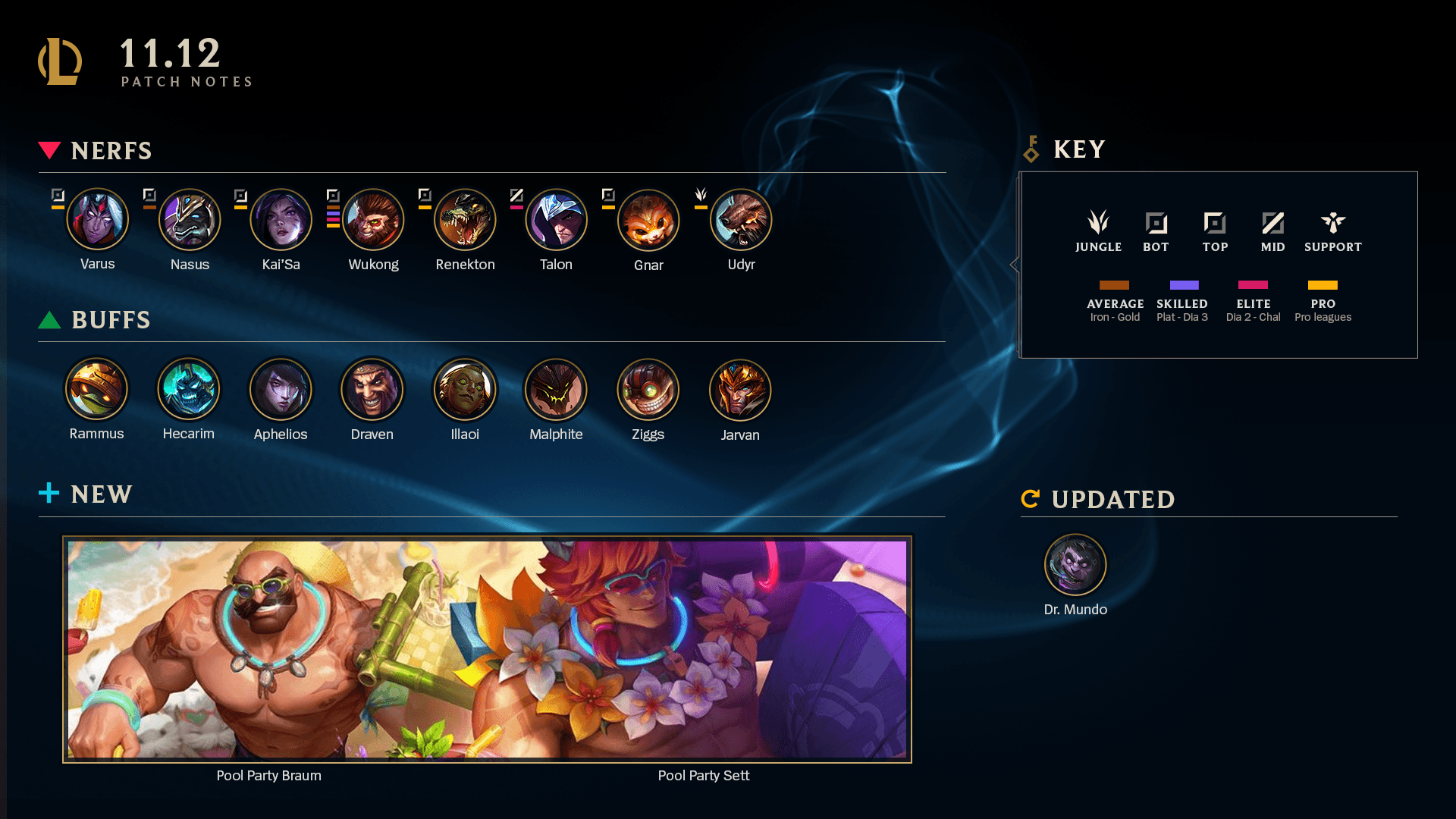 Pool Party Braum and Pool Party Sett will be available on June 11th, 2021.

The Madman of Zaun

"Cure" every patient and go where you please with the updated Dr. Mundo!

Dr. Mundo's legacy skins will be available for purchase in the store during patches 11.12 and 11.13.

Aphelios’ changelist is a whole lot of numbers, so we’ll try and break it down. First and foremost: yes, it’s an Aphelios buff! He’s been in a slump in terms of win rate and Pro presence, and could use a helping hand to get back on his feet. To do this, we’re buffing his base stats and weapon combinations that have fallen out of favor, while pulling power from the combos that have emerged as clear favorites. By upping the reward he gets from using Infernum and Severum as off-hand weapons, he should feel more well-rounded and prepared to take down his enemies, no matter what’s in his immediate arsenal.

With less early game AD from his core build than in previous seasons, Draven’s been less able to… well, Draven. Sharpening up his blades so he can keep up with his adoring fans.

Baby beast is still throwing temper tantrums, and his threat and harass potential can be too much to handle. We’re pulling back some of his early lane power to give his enemies a chance to catch their breath (and maybe even Gnar’s boomerang).

We weren’t kidding—Hecarim needed help last patch, and he still does now. We’re doubling down on the buff to his Q and reverting part of his 11.9 nerf. Time to run free, horsey.

With a smaller mana pool than other fighters, Illaoi often runs low on mana in later phases of the game. This leaves her between a rock and a hard place, where she has to carefully balance when to use mana to push faster and when she’s ready to take on challengers. To solve this, we’re increasing her mana scaling.

Jarvan tends to lose steam early on in a fight, so we’re giving him more incentives to stay in the battle and continue protecting the faithful.

This fearless predator has been making Pro play her prey. We’re looking to draw back some of her early game power by curbing her ability to control waves and giving her opponents more opportunities to punish her when her Q is down.

Malphite’s been feeling more rock-soft than solid. Combined with Bramble Vest’s nerf in patch 11.11, he’s hit rock bottom. To buff up his trading in lane, we’re amping up the thunder in his claps so that he can hit like the ton of bricks he is.

Everyone knows Rammus and Bramble Vest are best friends, so it should come as no surprise that he’s been feeling prickly after Bramble’s 11.11 nerf. To mend fences, we’re putting more armor in the armordillo and letting him slam down more often, so that he can continue running rings around his competition.

With the patch 11.11 buff to Divine Sunderer, Nasus has been a top dog (literally) in Average play, where he’s able to stay in lane and farm until the cows come home. We’re targeting this by reducing the amount of life steal he can get when he has easier access to minions.

This croc has been up and down the block in Pro play. With resourceless sustain and waveclear, he’s able to wade into lane and neutralize most matchups, then force fights by jumping on a victim with his point-and-click CC. To address this, we’re scaling back his healing.

Since our 11.10 nerfs, Talon’s settled in well—he’s about as strong as before in Elite play. We’re giving him another tap down by shifting power away from the initial part of his W and slightly lowering its overall scaling. To balance also giving a small boost to the second half of Rake, which is easier to dodge.

Tank Phoenix Udyr has been rampaging across Pro play. We’re pecking down the damage he gets from tank builds, but compensating for when he wants to go AP bird instead.

Varus’ buff in patch 11.4 on his W made his Lethality builds especially powerful, so we’re pulling back accordingly.

Before the buffs to Divine Sunderer and Black Cleaver in patch 11.11, Wukong was already performing well. We knew the boost to his core items could tip him over the edge, but we weren’t sure exactly where he’d land—and now that we do, we’re hoping to directly offset the power that he gained.

Ziggs hasn’t been around much lately, so we’re tossing him a bomb bone by strengthening his Q to spike harder in mid game. More importantly, we’re giving his ult a significant speed buff. This should make it more reliable when casting from long ranges while strengthening his powerful AoE damage in teamfights.

The following skins will be released in this patch: 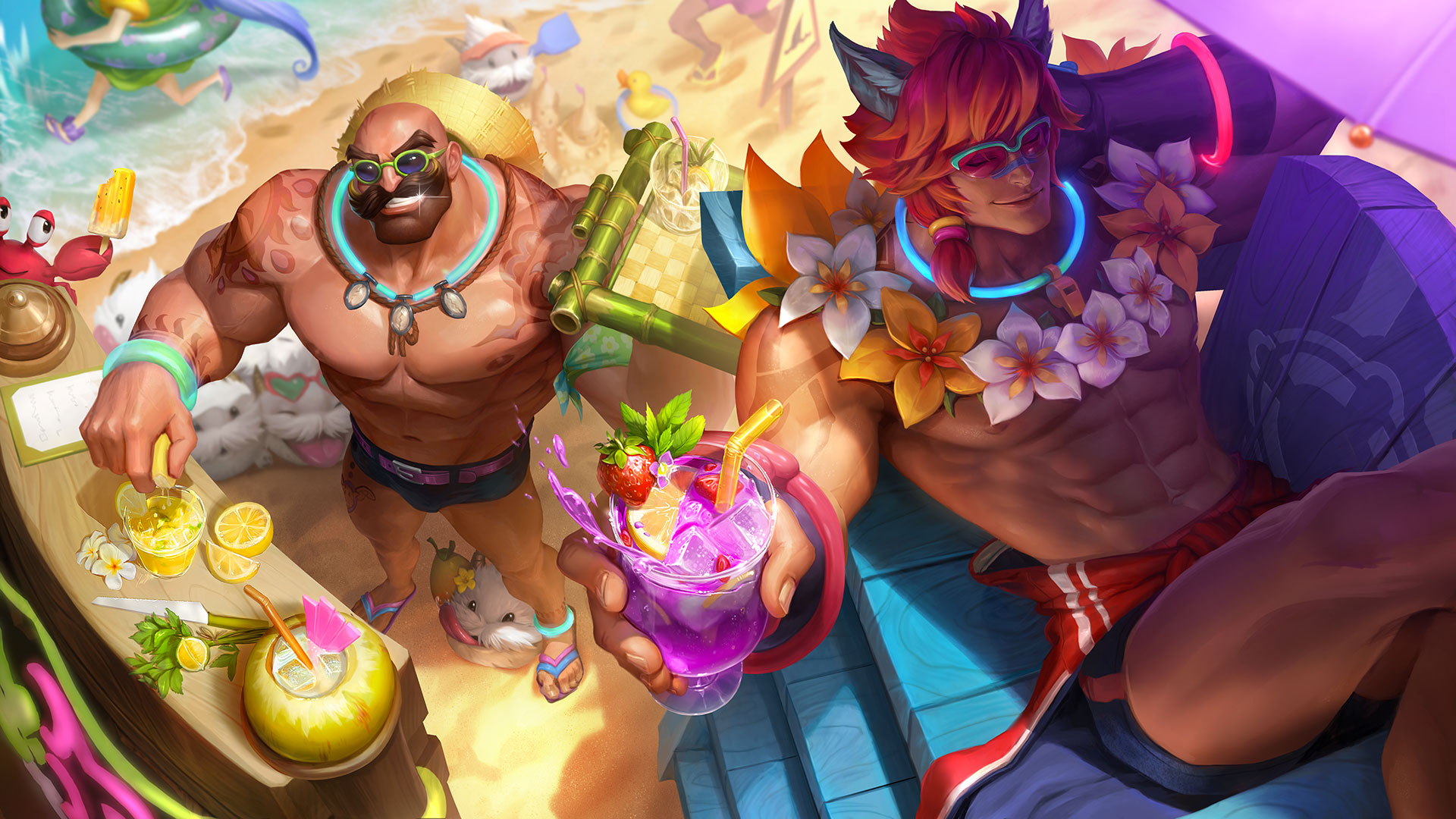 The following chromas will be released this patch: