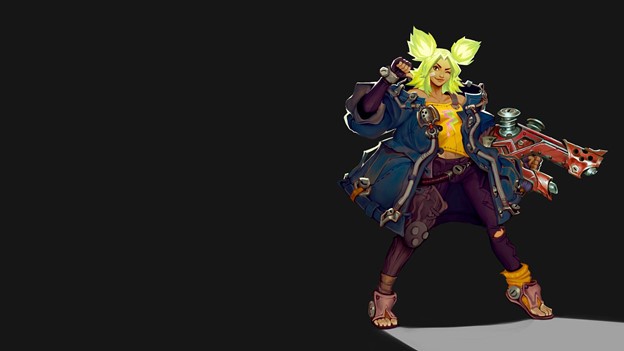 What if we told you Zaun isn’t just a city overwhelmed by caustic pollution, rampant inequality, and volatile technologies? That there’s more beneath the layer of toxic haze. That it’s a place where magic doesn’t just exist, it thrives; a place that values community above all else; a place that embraces the flaws of the people who call it home.

Well, now we have another way to experience this shockingly vibrant, neon-colored, side of Zaun. And her name is Zeri.

Most League champs start as a creative seed — something the team uses as a jumping off point. But rather than a gameplay hook, someone from our lore or a beautiful piece of concept art, Zeri began her life as a gun.

“Shooters are interesting because they’re very high precision games. Aim matters—it’s one of the most important things you can do,” explains principal game designer August Browning. “In League, ADCs can attack really fast, but they’re not really engaging in a precision game the way you do in FPSs. Ezreal, Mr. Skillshot Man, is the closest we have to that, but he’s still not quite there. There’s something really satisfying when you spray down someone in a FPS that we don’t get with ADCs, so we wanted to see if we could bring that feeling to League.” 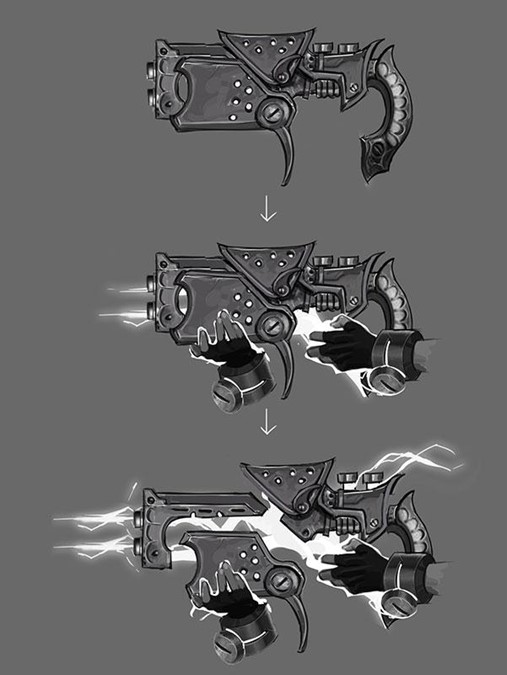 League’s got a lot of guns,, but none of them really capture the feeling August was going for. So it was time to bring a new gun to the Rift: the assault rifle.

Assault rifles are a staple in tac shooters. They offer the feeling of spraying a controlled cluster of bullets at high speed, as opposed to the mouse-point accuracy of a sniper rifle or the spray-and-pray of an LMG. But there was still a foundational problem with the entire concept: How do you bring precision-based autos to League when playing ADC is all about right clicking?

We all love a good “attack-move until they die” champ like Jinx or Kog’Maw. But right clicking doesn’t really give you the dopamine rush that you get when you flick headshot an enemy. So, in order to give Zeri the high-precision fantasy, August decided to make Zeri’s “autos” a skillshot.

“But Riot, you literally just said that ADCs ask you to right click... How do you right click a skillshot?”

Easy. Zeri autos with her Q.

“We don’t design champions with an alternative form of auto attacks just to be different. It’s a way to deliver a very specific feeling when playing as the character,” August explains. “Zeri has unique autos because we wanted to bring the FPS precision fantasy to League. But that means she has a higher learning curve than other ADCs. A good Zeri is going to be moving around a lot to land all of her Qs, but it’ll take a little bit of playing to get to that point since it’s different from most of the other ADCs in the roster.”

Beyond gunplay, Zeri also brings another common mechanic from shooters: movement. But before you start thinking “what the actual f*&^ Riot???” just hear us out.

Movement’s not a novel idea in games—we’ve talked about mobility quite a bit before, but the way it works in League is very different from shooters.

Shooters require you to move quickly between points, set up flanks, and navigate vertical obstacles to pick people off (or to miss all of your Op shots). And while League’s got TPs, flanks, and the occasional case of running it down, these don’t capture the “full rush” feeling that your team seems to always do in comp matches. That meant Zeri needed something that captured the high mobility sprinter feeling, while still working in League.

It was around this time that concept artist Nancy “Riot Sojyoo” Kim drew a spread for Zeri, and one of the options had a seemingly simple addition: rollerblades.

“I really didn’t like Zeri with roller skates at first,” August laughs. “But when I was thinking about cool ways to do mobility, I thought that they actually kind of fit. I could imagine Zeri skating on the pipes around Zaun. It made me think of skateboarding games where you just go up to a wall or halfpipe and just grind down the whole thing. So, yeah... Zeri can do that. She just grinds over any wall in the game.”

In addition to her ability to leap over walls, Zeri has another unique interaction with them—wall banging.

“I worked closely with Riot Sojyoo and one of the senior concept artists on VALORANT, Konstantin ‘Zoonoid’ Maystrenko to brainstorm a lot of different ideas,” recalls concept art lead Gem “Lonewingy” Lim. “We had so many ideas! Origami paper magic, graffiti, fog and soot, light magic, liquid metal and mercury, human printer, baseball girl, VR gamer girl... And then someone suggested a bioluminescent, electric eel girl, which we all thought was really cool.” 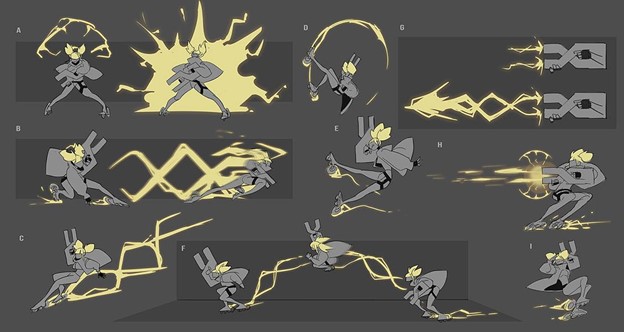 Runeterrans can be born with magic no matter what region they call home. Ionians have a higher chance of being born magical than people from regions like Piltover or Zaun, but it’s not impossible. And while we have a few magic-wielding champions who call the twin cities home, most of them are powered by Hextech and Chemtech. 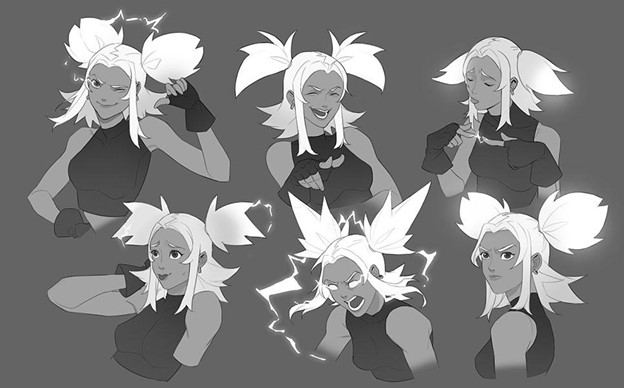 Zeri’s magic manifests from within, like a human battery, and it’s strong. Like, really, really strong. And because she’s so young and hasn’t quite figured out how to use it consistently, sometimes it manifests in ways she can’t control.

“Zeri’s still coming into her powers. She’s pretty different from a lot of the champions in Piltover and Zaun who are older and more reassured in their strength, like Vi, Viktor, or Jayce,” narrative writer Michael “SkiptoMyLuo” Luo shares. “She has some similarities to Ekko in that way. But where Zeri is different is how her magic works. She can’t control her powers yet, and she’s actually a bit of a mess. She’s anxious, she’s clumsy. She’s just all over the place, which fits that electric theme really well because she’s just going really fast all the time. I think that this emotionally-charged electrical personality fits with August’s gameplay really, really well.”

Zeri’s ultimate is the manifestation of her high energy, electric state. She becomes incredibly pumped up, ready to take on everything, and is overflowing with electrical energy. What this means in game is she receives an attack speed and movement speed steroid, charging into the fight, getting hyped up at how well she’s using her power.

But this level of magic doesn’t come without its drawbacks.

Imagine being a source of constant electricity that becomes less controllable when you’re feeling strong emotions. You need to be wary when you hug your parents, or when you have your first kiss. Even a nightmare in your sleep could make you lose control. 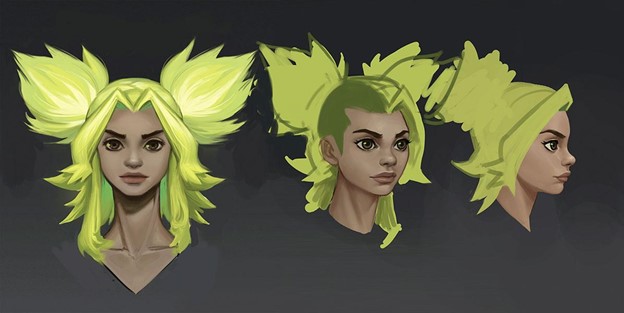 With her volatile magic, Zeri could so easily be seen as a problem to fix by the citizens of Piltover. But luckily Zeri’s not from Piltover. She’s a Zaunite. And Zaun has a different take on how to handle someone who’s different: One that’s less focused on democratizing magic for the masses, but instead uplifting what makes their community unique, what makes it beautiful beneath the layer of grime, what makes it Zaun.

The Bayanihan Spirit in Zaun

There’s a lot to consider when we’re making new champions: difficulty, gameplay fantasy, and silhouette (to name a few). But beyond these, we want players from everywhere to have a champion they can relate to—someone they see themselves in.

A lot of our champions have been inspired by the stories and cultures of the devs who work on them, like Akshan's penchant fr Bollywood-esque theatrics, or Samira’s immigrant’s story. And Zeri is no exception.

“It was my personal goal to make Zeri Filipina. Not just because I’m from the Philippines, but because gaming is such a huge part of life there, and there isn’t much representation for us in games—especially for Filipina women. In fact, there are only like... four Filipina video game characters I can think of,” Lonewingy shares. “When SkiptoMyLuo pitched the electric eel idea I wrote a sort of...” She laughs. “I wrote this very grade school story about a girl who belongs to a middle class family in Zaun, who couldn’t control her powers. She’d cause blackouts in her neighborhood—which are really common in the Philippines! We actually had a huge blackout caused by jellyfish that got sucked into a tube at a power plant!

“So I was just thinking of this lighthearted, clumsy girl. But it just... It felt so right to me,” Lonewingy smiles. “There’s this word in Tagalog called ‘kababayan’ and it’s used to describe a fellow Filipino—someone from your village, your neighbor, or just anyone. We’re a very family- and village-oriented culture, and we believe in helping everyone out. I wanted Zeri to have that core part of Filipino culture ingrained in her because I view Zaun as a place that would have that neighborhood culture. Then SkiptoMyLuo took my silly story and made it much better.”

(SkiptoMyLuo unmutes in the call and scoffs at this comment.)

“Those conversations were super inspiring! I latched really hard onto them, especially the part about her being a lovable mess. In Zaun we have this incredibly fascinating environment that’s very grimdark—it’s hard to survive there,” SkiptoMyLuo offers. “But the other side is that it’s also a city of gritty beauty that we really love. There are all of these lovable characters there, like Ekko, who reinforce the feeling that Zaun isn’t a place that should be written off and forgotten. And I think champions like Zeri really help bring that out in another way. It’s not just about her, it’s about her family and the whole community of Zaun around her.”

So, going back to the whole “Zeri has an insane, difficult-to-control level of power” thing... That’s where her neighborhood and family come into play. 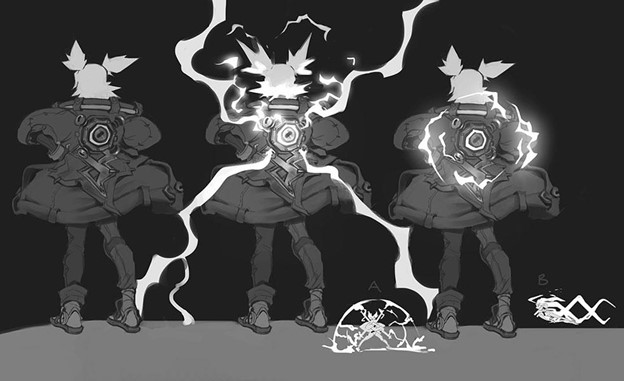 Everything Zeri has—and is—is from her community, not from the ultra rich Chem-barons and their corporations. Her jacket, a neighbor’s hand-me-down, was modified by her father to dampen her powers and let her hug her family. Her gun was lovingly made by her mother from industrial scraps found by neighbors who wanted to help her direct her powers. And in turn they asked for nothing. But nothing isn’t good enough for Zeri. She needs to return the unconditional love and support they give her. And so she fights for them. She fights for Zaun.

“I think... I think we’re all really proud of who Zeri ended up becoming,” SkiptoMyLuo smiles. “When Lonewingy told me about the importance of community in the Philippines, it just all sort of clicked: Zeri’s a community-made hero. It has this nice cohesion when the game design, narrative, and art all come together. She’s not perfect or anything, but she definitely stands out in Zaun and adds a bit of lightheartedness and joy. But unlike characters like Seraphine, she understands the grim realities of her home. She’s not naive, and she’s far from being ready to save the world or anything, but she’s trying her best despite all her mess ups.”

And luckily she has the rest of Zaun—her community—to catch her when she falters.