Find all the outfit details for each member of this year's class in the second part of the official Star Guardian cosplay guide!

The Star Guardians are protectors chosen by the First Star to safeguard the light in the universe. Accepting the First Star's call to protect the world can be daunting, but getting to wear the most beautiful outfits in the literal universe is a pretty nice perk. If you're inspired to cosplay as one of this year's new class of Star Guardians, this guide is for you!

This is the second part of a two-part series. Check out the Star Guardian Cosplay Guide: Part 1 here! 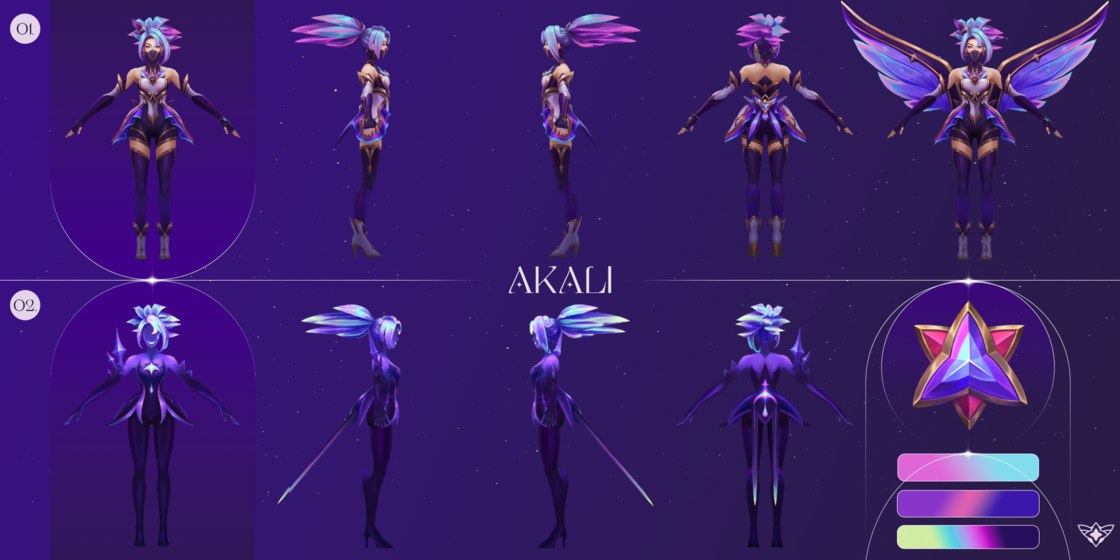 Star Guardian Akali's main color is indigo, which varies in shade throughout her uniform (and hair) into purple, violet, and blue. The ruffles at her waist are a sturdy satin fabric with blue edges, whereas her gloves, shorts, and stockings are spandex. Normally she's seen in her (1) Base Form but when she's, well, unseen in her Twilight Shroud, she changes into (2) Shadow Form. Akali's (3) Wings activate during Homeguard, Recall, and when dashing in combat. Akali's weapons of choice are her (4) Kama, (5) Kunai, and (6) Shuriken. Her familiar, Umi, seems super spunky but is actually a major softie on the inside. 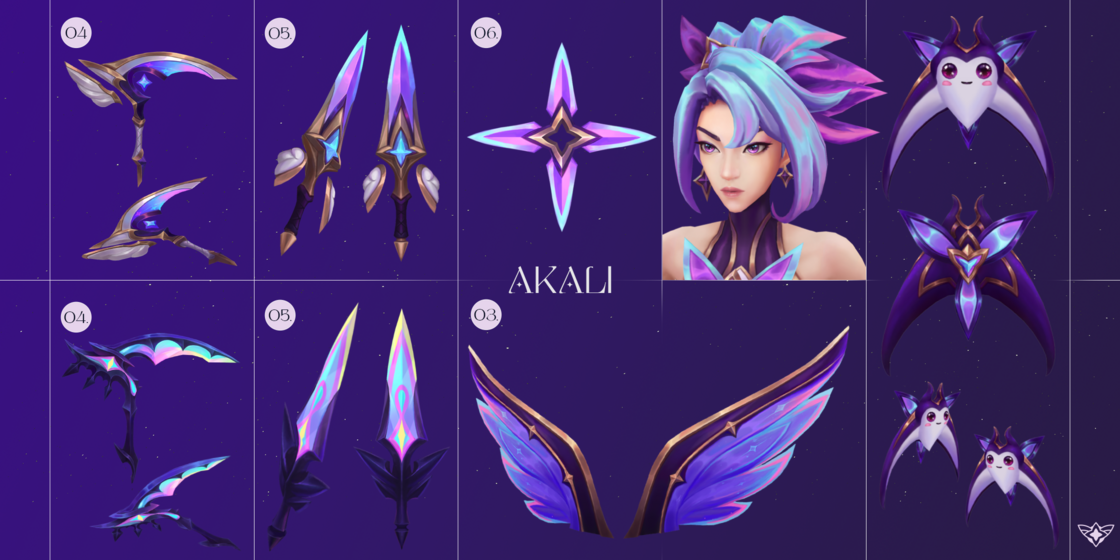 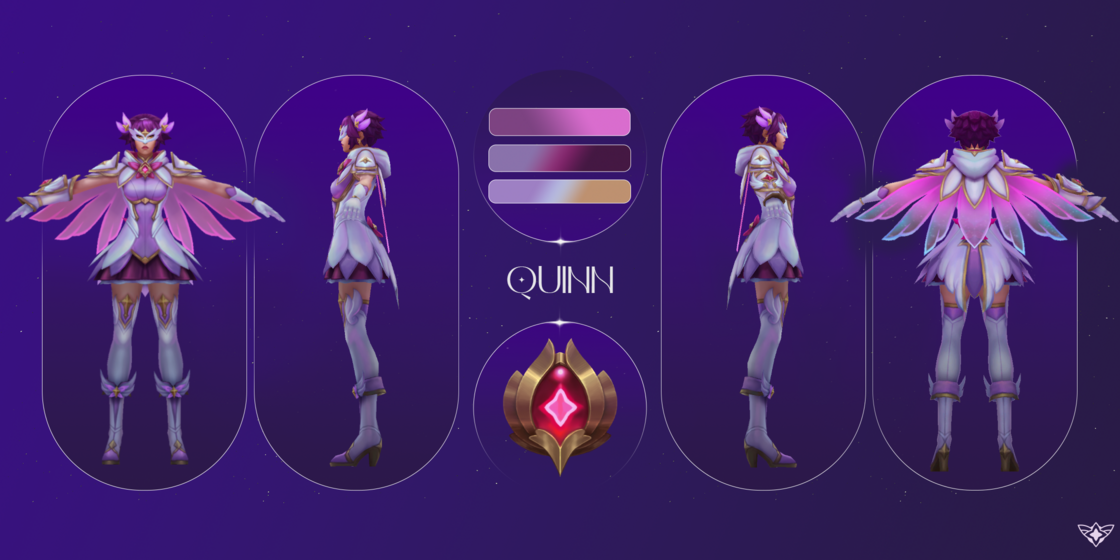 Star Guardian Quinn's primary color is magenta. The uniform is a lot frillier than what she'd normally wear, but getting to wear the (1) Eye Mask sorta makes amends. Her cape is similar to stiff, structured organza, and her skirt is a thicker satin material. An elite scout, she has a special (2) Wristguard to go with her adorable-but-deadly (3) Tuskvore Crossbow. Valor usually accompanies her in his (3) Familiar Form, but when it's time to fight, he arrives in his majestic (4) Ultimate Form. 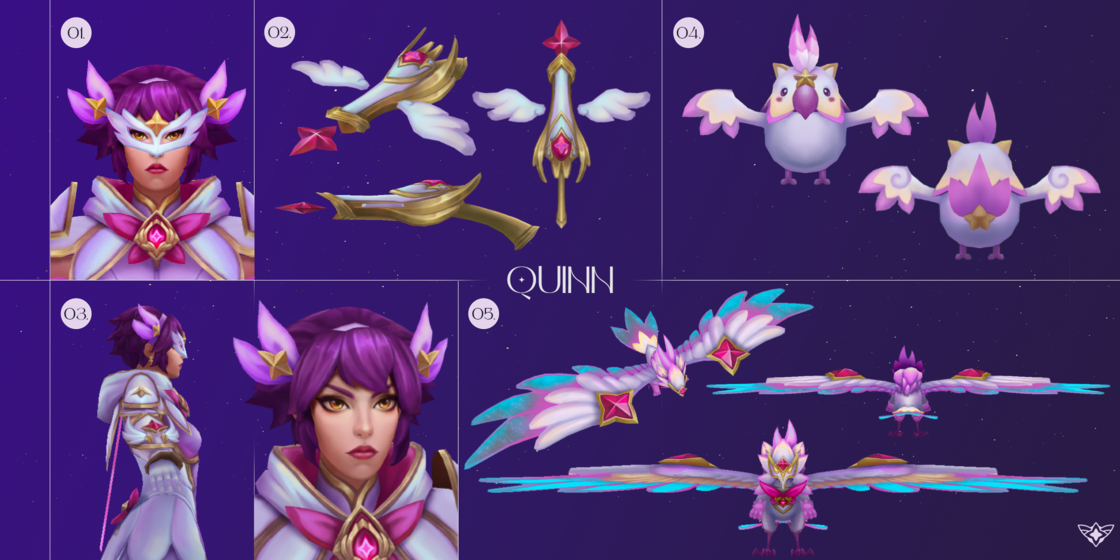 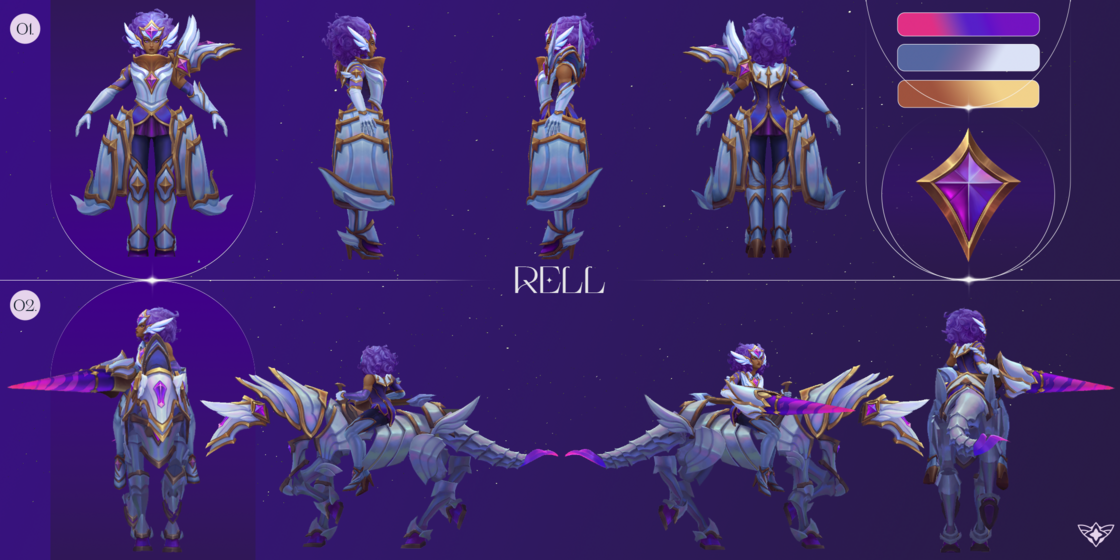 Star Guardian Rell's uniform is mostly purple with hot pink accents and switches between her (1) Dismounted Mode and (2) Mounted Mode. She has a (3) Winged Faceguard which provides defense in both modes. Much of her armor is shiny metal, but her skirt is pleated satin and her leggings are like spandex. She wields a (4) Metal Lance which switches modes. She uses her Ferromancy talent to maneuver her (5) Iron Steed, which is actually her familiar Sebastien's alternate form! 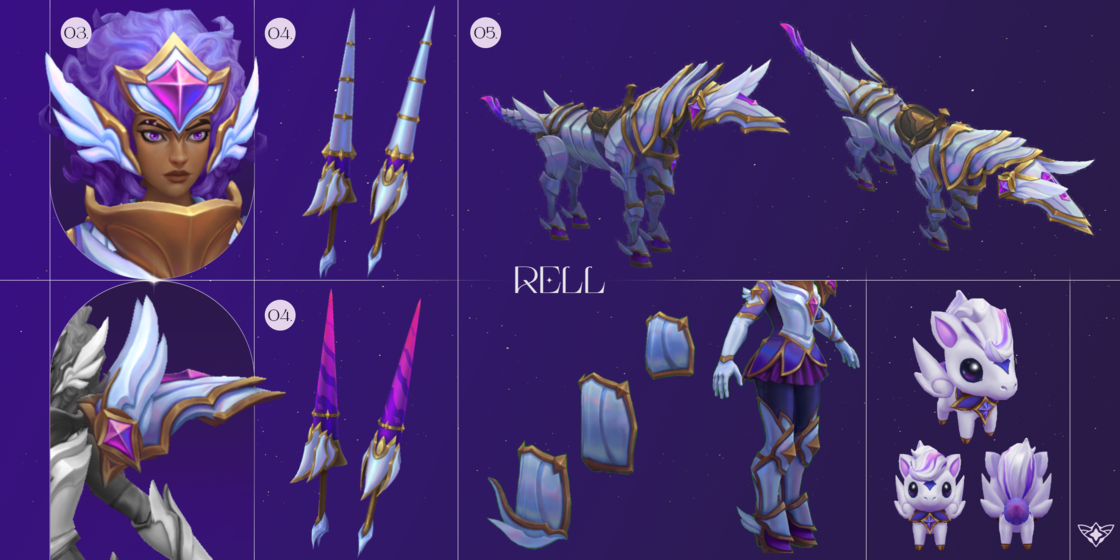 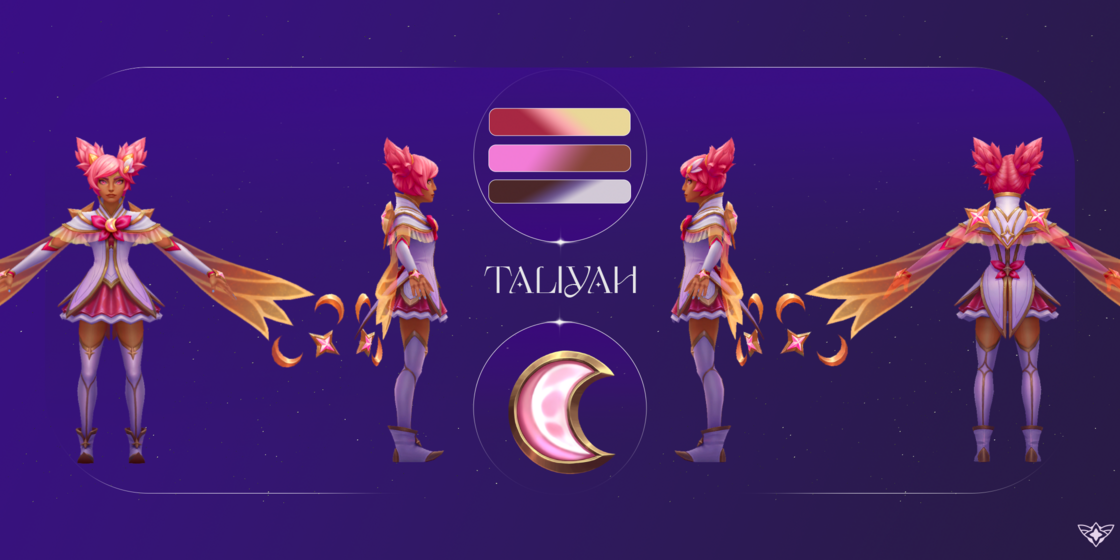 Star Guardian Taliyah's color is a warm peach. The ruffles under her shoulderpiece and her scarf are made of flowy, glowing laser gauze, whereas her skirt is a sparkly pleated satin She's a unique Guardian who uses both stars and lunar symbols, like in her (1) Ribbon. She uses her powers to glide along terrain with her (2) Star Surfer. Her familiar, Aru, is always around to help and should never be mistaken for a suspiciously large cinnamon roll. 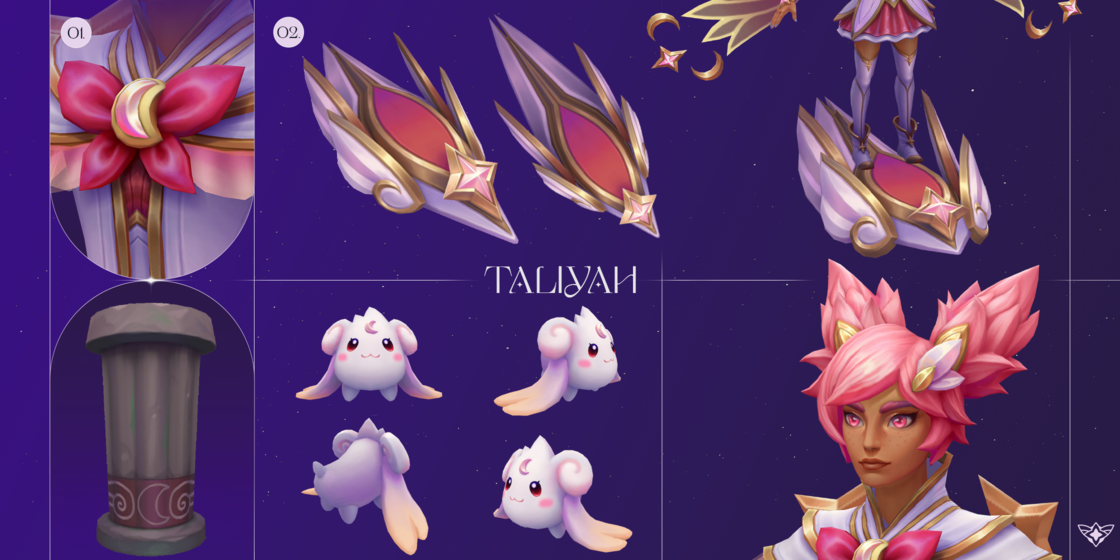 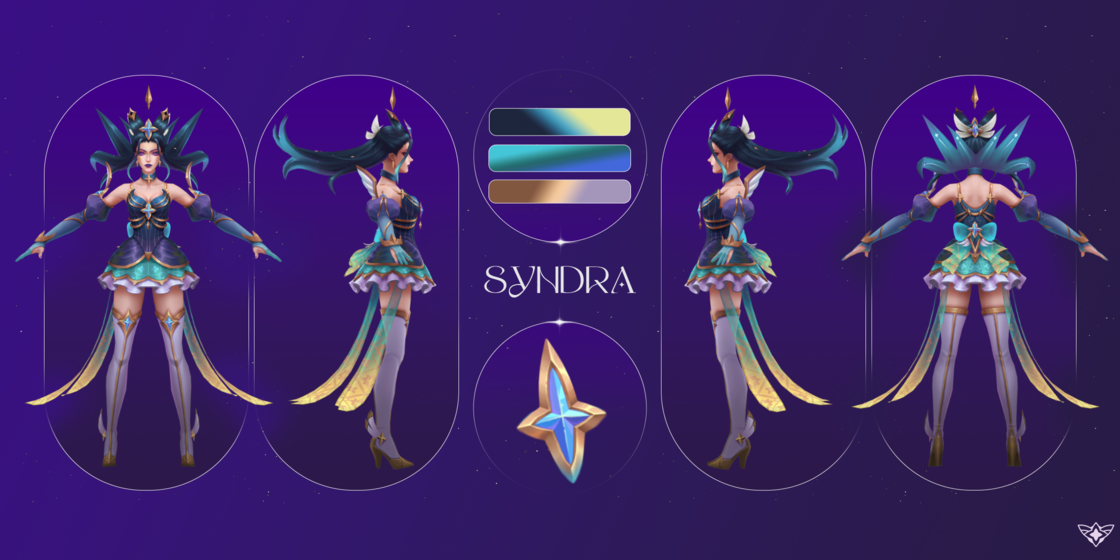 Star Guardian Syndra's Prestige Form is a stark contrast from her base form. Her main colors change, incorporating aegean blue and warm gold. She has an exquisite (1) Hair Piece and other grand jewelry. Her skirt no longer has sharp spikes and instead turns into ruffled satin with a matching back (2) Ribbon. Her skirt, bodice, and ribbons all have her crest printed on them. Her familiar Multi also transforms into a brighter, crystalline form. 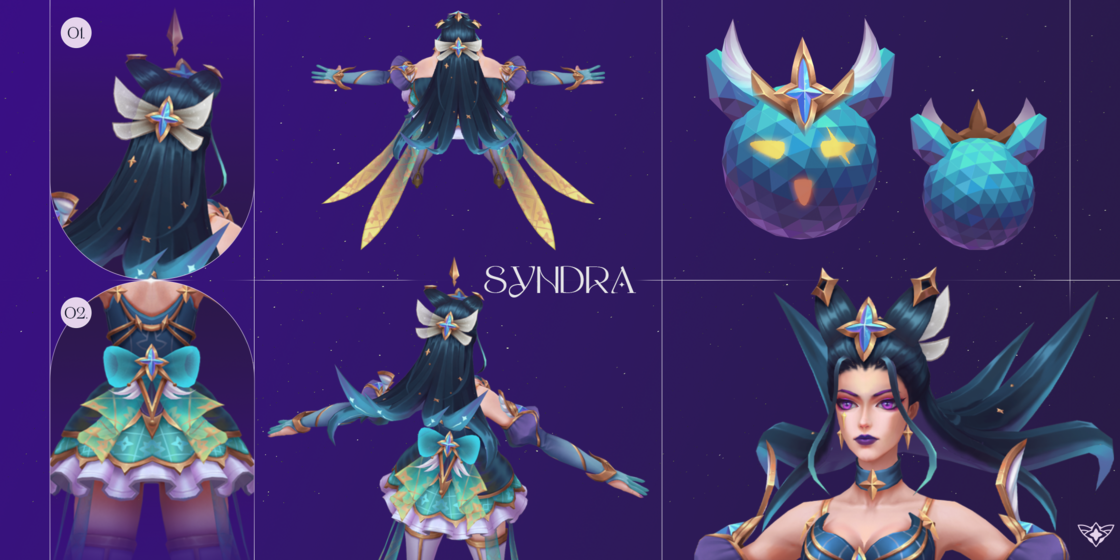 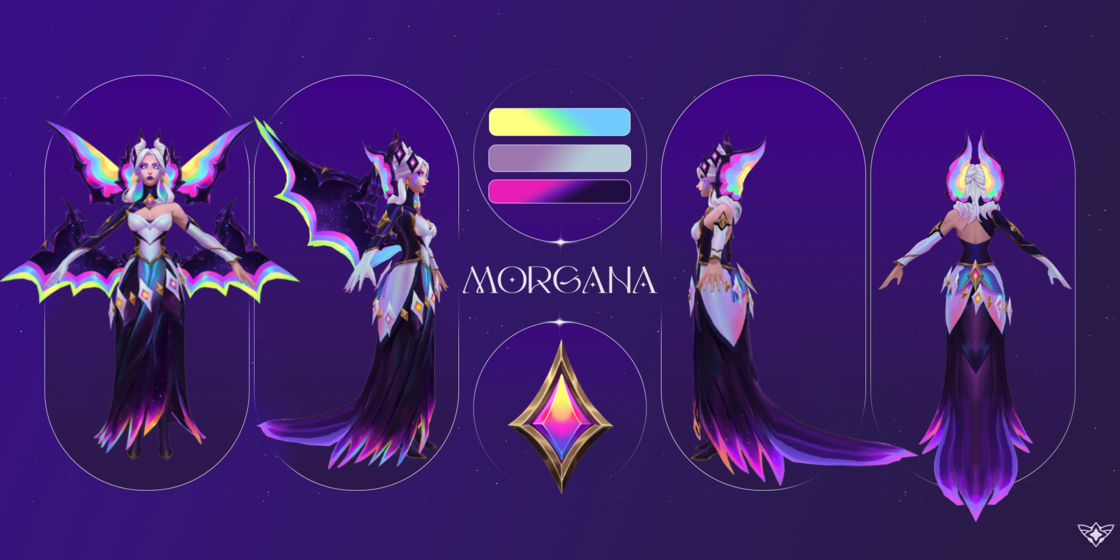 Star Nemesis Morgana's color palette is a multi-colored blend of orange, pink, and an ominous shade of purple. Her wings and velvet skirt which glimmer with mysterious star motifs. The white parts of her bodice and sleeves are closer to ciré, and her gloves and stockings are shiny spandex. She has a sharp (1) Crown and a (2) Belt of gems collected from fallen Star Guardians. Her familiar is a mischievous, cunning creature named Rigel. 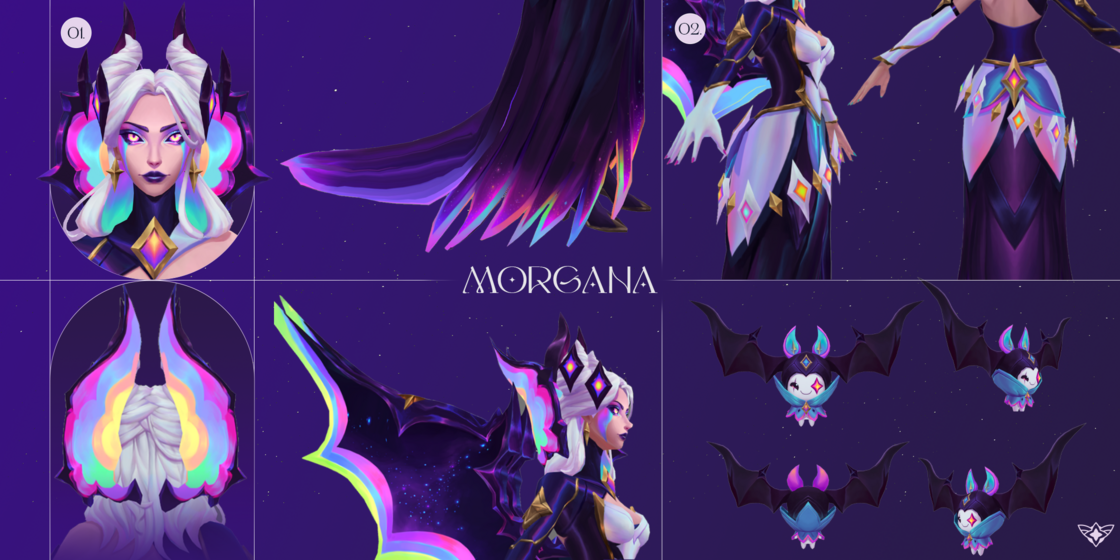