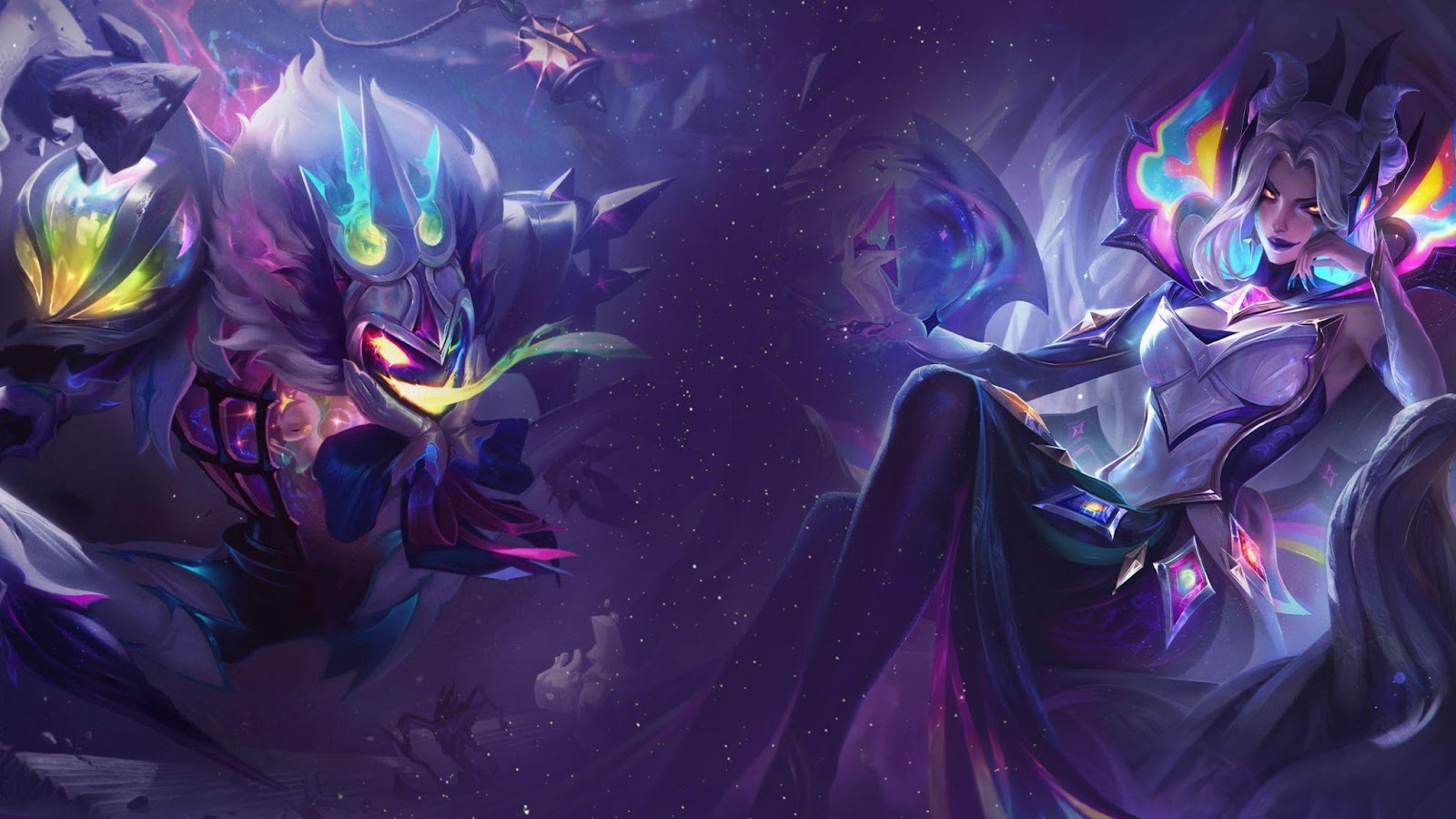 In Valoran City, the light of the Star Guardians and the neon-soaked alleyways of the metropolis have long served as a beacon reaching out to the darkest corners of the universe.

Now, the darkness is reaching back…

If you’ve followed the Star Guardian saga so far, you know there’s always been a chaotic force at work—a dark power that stirs conflict within the Guardians and makes them question their pact with the First Star. Some fall to this corruption and go mad like Zoe, the Twilight Star. Her sole purpose is to kill the Star Guardians and resurrect them as her allies using powerful chaos magic.

During the battle of the Twilight Star, the Guardians were able to defeat Zoe and send her back to Dark Space. But the question remains—what (or who) sent Zoe down this destructive path in the first place?

When the news broke that some ominous, new villains were headed to the Star Guardians in the latest visual novel, “Another Sky,” it’s safe to say that Fiddlesticks probably wasn’t too high on anybody’s list of prospective new-joiners. Morgana? Sure, she fits the bill. And we’ll get to her later. But Fiddlesticks? What the hay?

“When Fiddlesticks first appears in the story, it is very much this force of fear,” explains principal narrative writer Jared “Carnival Knights” Rosen. “It’s a character that’s stalking Akali specifically, but it also infiltrates the dreams of the other Star Guardians. Fiddlesticks is like a hunter that’s slowly stalking its prey, getting closer and closer, and none of the Star Guardians can figure out why or what the connection is.”

The Guardians watch helplessly as Akali begins to dwell on her traumatic pastand pull away from the rest of the group. Kai’Sa and the rest of her team are deeply concerned for Akali and wonder what’s pulling their friend toward the darkness of the Chaos Dimension. But during Fiddle’s assault on the city, the Star Guardians get their answers from a most unlikely source. 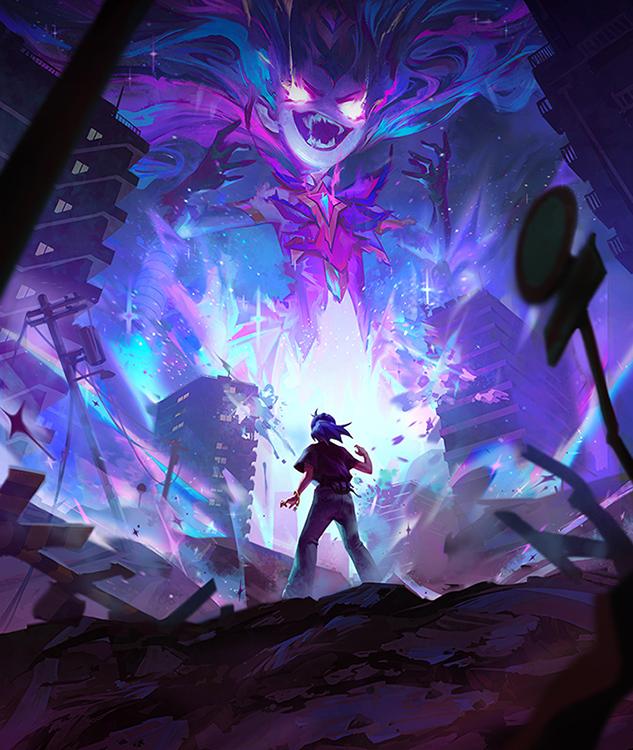 Zoe and Syndra return to Valoran City, only this time it’s to aid the Guardians in their efforts to defeat Fiddlesticks. The two reveal that Fiddlesticks is more than just a monster from nowhere—it represents the fate of all Guardians. This mindless beast from the Chaos Dimension was actually once a girl named Harp, one of Zoe’s best friends, and part of the very first class of Star Guardians.

“Harp was literally the first Star Guardian who ever fell and is the reason that Zoe is violently insane,” says Carnival Knights, “Her falling is kind of the thing that triggered a lot of problems for the Star Guardians overall. Up until that point, nobody knew that becoming a Star Guardian meant that you had to burn out.”

When Harp fell to true darkness, she was consumed by chaos and transformed into the monster named Fiddlesticks. All that remains of Harp today is her familiar, Geist, trapped in a cage at the center of Fiddle’s body. A similar fate awaits all oathsworn Guardians who don’t die in battle. And as the Guardians start to discover these details, Zoe’s purpose becomes more clear to the team. She’s merely trying to prevent this inevitable fate from happening to the other Guardians in her own twisted way.

Geist before and after becoming trapped within Fiddlesticks.

“We wanted Fiddle to have some sort of tie to Zoe,” says concept lead and Star Guardian art director Oscar “gay lil frog” Vega. “So we started thinking about things that Harp would have done with Zoe before she fell. There was an idea that maybe Harp played music for Zoe—or maybe she liked to read her books. And then we ultimately landed on the chess theme.”

Early ideations on a theme that ties Fiddlesticks to Harp.

“We thought chess was nice because Zoe and Fiddle’s playstyles are both very tactical,” Oscar goes on to explain. “With Fiddle, you’re positioning your effigies and trying to find your best

angle in, and with Zoe you’re doing all this math and geometry to hit someone. So we thought that felt really true to both characters.”

An early visual concept of Harp morphing into her ultimate fate as Fiddlesticks.

If you look closely, subtle elements from Harp and Zoe’s chess-playing Star Guardian past are evident in the details of the skin. Oussama “Whiteleyth” Agazzoum, concept artist for Star Nemesis Fiddlesticks, used that backstory as a strong opening for his final concepts on the skin.

“I took that chess theme and ran with it, trying to explore different versions with different pieces, mainly pawn and knight,” says Whiteleyth. “Also, when doing the lantern design, we tried to add a subtle hint of the backstory with a little star inside the lantern that’s broken, hinting how it was a Star Guardian before.”

Orthographic view depicting the cage at the middle of Fiddle as well as the broken Star Guardian gem in its lantern.

Even Fiddle’s visual effects have been influenced by Harp’s love of chess. When it strikes opponents on the battlefield with its Reap and Crowstorm abilities, the landscape around Fiddle’s target becomes a twisted and macabre chess board from the chaos realm.

As the Star Guardians unravel Fiddle’s endgame, they’ll soon find out that it’s not the only thing harrying Valoran City.

While Valoran City and the Star Guardians are distracted by the powerful Fiddlesticks, a more cunning and strategic agent of chaos lurks in plain sight.

At first glance, Star Nemesis Morgana looks like an obvious villain for the Star Guardian universe. But little does everyone know, the space villainess has a day job. And where would an evil space queen work? Somewhere she can keep her enemies close.

“In her characterization in Star Guardian, Morgana is very anti-justice. She’s very anti-order,” Carnival Knights explains. “But also, she spends a lot of her time masquerading as a minimum-wage, part-time teacher at Valoran High School. So her true purpose is being sort of masked and she eventually unveils it at the height of her power.”

As Morgana interacts with Kai’Sa, the newest Star Guardian leader, and Akali, the guardian who’s most skeptical of her oath, it becomes clear that Morgana’s got more in mind than just teaching these star pupils. Morgana seeks to expose all the Guardians to darkness through subliminal subversion, and if necessary, through death.

For the keen observer, there are some subtle hints at Morgana’s true motives even while she’s in disguise. Concept artist for Star Nemesis Morgana, Vlad “Darkrown” Bacescu, drew heavily on these details in his approach to designing this space-wolf in sheep’s clothing.

“It’s funny because Morgana is very Star Guardian at first glance,” Darkrown explains. “She’s got the white bodice, she’s draped in gems, all the shiny materials, but she’s got a subtle sort of uncanny valley thing going on. Her eyes don’t look natural and anime-like like all the other Star Guardians. She’s got tendrils wrapped around her instead of a skirt, and her wings and her crown are more chaos realm than Star Guardian.”

But that’s not all. If you’ve got a keen eye, you might notice something a bit… familiar… about her belt. “She’s got a belt made of Star Guardian gems draped around her waist,” Darkrown reveals. “They’re like trophies stolen from fallen Star Guardians that she casually wears around like an accessory. Something I was really keen about is that she also keeps the belt on her in her teacher form. If you think about it, it’s quite scary.”

Aside from wearing death as an accessory, Morgana also seeks to intimidate the Guardians with chaotic energy in her abilities. Even her familiar, Rigel, is a bit of an edgelord who gets their kicks from, well, kicking other familiars’ asses.

Morgana channeling Soul Shackles with Rigel popping up to remind any other familiars on the Rift who’s in charge.

Rigel showing up above Morgana’s head during her ult is just one of the many details present in her visual effects for her Star Nemesis debut.

“We worked closely with Vlad to make Morgana better and better in game,” says visual effects artist Dmitry “Destroyeer” Bogatov. “I tried to focus on her color palette and character concept. For example, we turned her W, Tormented Shadow, into a dark pond with a starry sky in it. The surface of the water reflects the characters walking on the pond and Morgana herself. It also has a mirror reflection of her Q ability.” 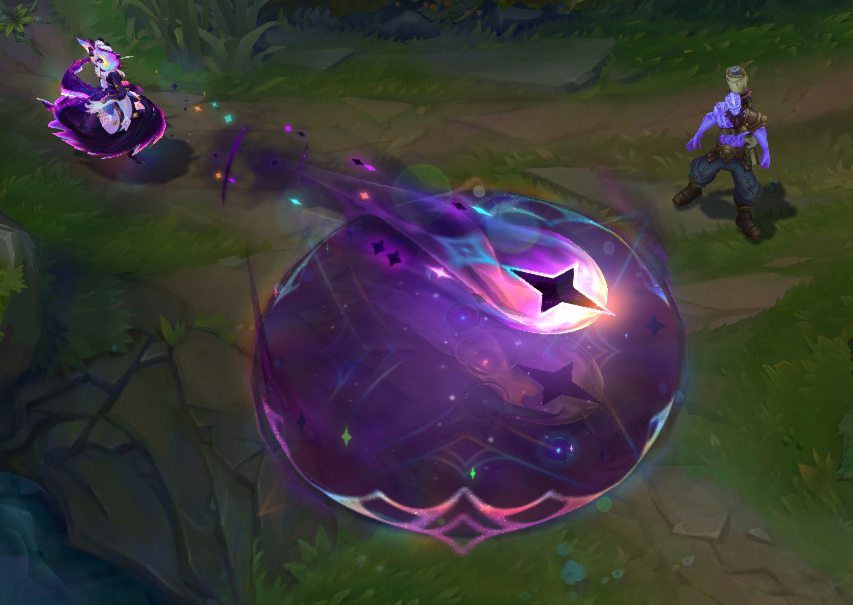 Bringing Darkness to the Light

In a universe full of bright, shimmering, magical anime girls, adding a touch of evil can seem jarring if executed (no pun intended) without some strong visual and narrative guidelines. So how did the team make these two villains seem like natural baddies in “Another Sky”?

“I think the approach with Star Guardian art-wise is usually like a really traumatic, sad, tragic story in a candy-coated wrapper. So we never want to make the art feel as if it’s gonna give away how sad the story is,” gay lil frog says about how the new villains fit into the Star Guardian stories.

“I think Fiddle was actually early on in my mind when we knew we wanted to do villains because I think of what Fiddle’s character fantasy is,” gay lil frog adds. “Fiddle’s fantasy is all about fear right? It’s all about throwing fear at your enemies which is good for Star Guardian because a lot of their stories are set around fear and doubt and anxiety and all these things coming to them.”

Yep. Even the magical beings known as the Star Guardians are still teenagers, first and foremost, each one dealing with their own versions of fear, self-doubt, and anxiety. Naturally, each of the new Star Nemesis villains prey on these weaknesses in their own way. While Fiddle throws fear (quite literally) at the Guardians, Morgana uses her influence to attempt to undermine the legitimacy of their pact with the First Star.

“The ideals of justice and order in an organized society are antithetical to her being,” Carnival Knights reveals. “It’s a very human darkness. I’m into the idea of entropy and freedom and nothingness. It becomes clear later on to the Guardians that she’s antithetical to the very concept of Star Guardians being a thing.” 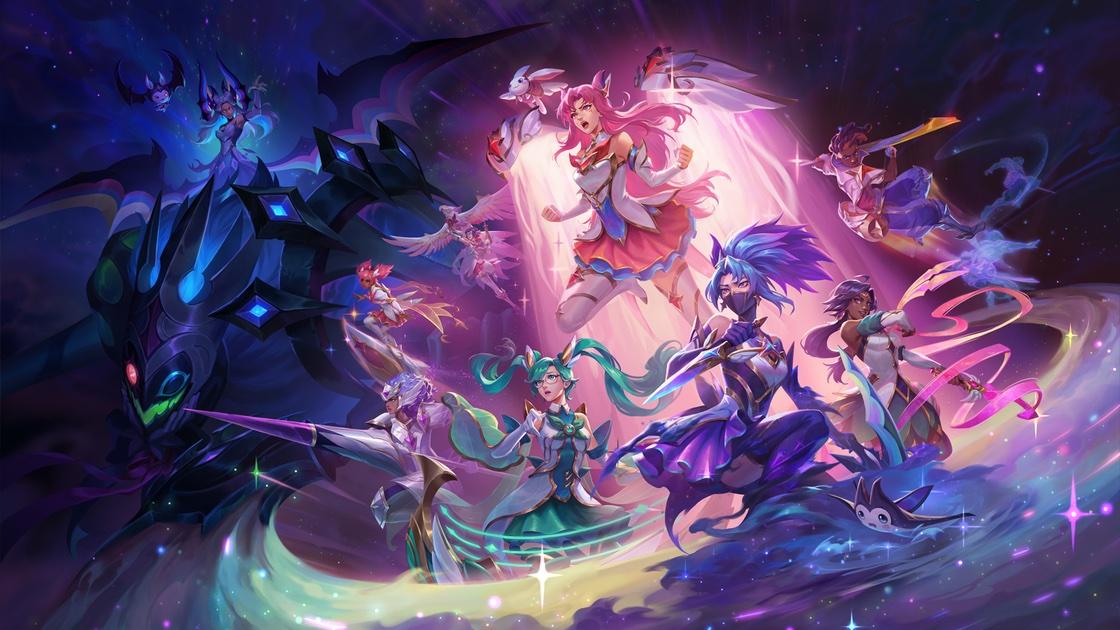 The current class of Star Guardians.

As the villains in Star Guardian become deeper and more layered, so too does the opportunity to pay off the complexity of the magical girl universe trope as a whole. And according to Carnival Knights, the narrative team is really just getting started on that work.

“Another Sky is a story about, first and foremost, generational trauma experienced by young people,” says Carnival Knight. “Which is a thing that’s kind of like happening actively now. That wasn’t the intent when we started putting the story together over a year ago, but as things in the world have progressed, it’s like ‘ok well, there’s a bit of a theme going on right now.’ As for the story itself, we’re just now really digging into the meat of what Star Guardian is.”

But if there’s one thing that’s for certain, when it comes to Star Guardian, there’s nowhere to look but up.