Dynamic queue and the future of League

BY SOCRATESWith the introduction of dynamic queue, we alienated a portion of League’s passionate player-base who believe a ranked competitive experience should be limited to a solo (or duo) endeavor. We agree dynamic queue standings don’t reflect pure individual skill as well as a solo ladder, but they also don’t inhibit competitive team experiences, and that’s a trade-off we want to make. After considering all possible options and assessing the gains (and losses) of dynamic queue over the last five months, we've made the decision to not bring back solo queue.While we’re committed to dynamic queue, we know there’s still a few problems we need to solve. We highlighted the most serious issues and what we’re doing about them in an open roundtable discussion you can watch here. Below, we’re covering the data behind the problems as well as expanding on some of the answers presented in the video.

Position select isn’t sufficiently prioritizing primary roles and we’re working to improve how it does so. You should get your primary position more often whenever possible. Right now, a support main has a 95% chance of getting his role, while a mid main has only a 55% shot at getting hers. Different combinations of roles also vary quite a bit. For example, if a mid main is a support secondary, she’ll end up mid only around 16% of the time. 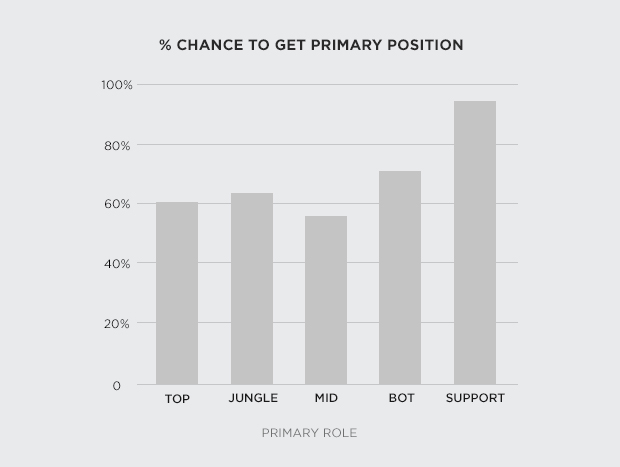 Over the next few days we’re rolling out a few adjustments to tackle this problem directly. We’re increasing the likelihood you’ll get your primary role, and we’ll continue working to improve this.

We’re also tackling match quality because games featuring premades versus non-premades are unfair, even if they are rare. Delving into the numbers, Bronze, Silver, Gold, and Plat solos, duos, and trios battle a five-player premade in about 1 game out of 1000 (slightly more often in Plat). In Diamond, the odds of encountering a full premade jump to 1 in 150, and then skyrockets in Masters+, where players encounter a five-stack as often as 1 in 25 games. Despite being relatively uncommon below Diamond, the winrates look like this overall: 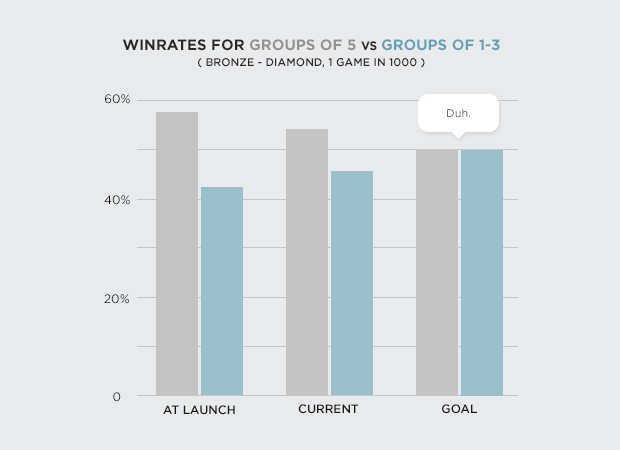 We’ll be adjusting premade handicaps further to even the playing field between premades and non-premades.

We know we can guarantee reasonable matches for almost all players, but elite MMR has such unique issues we need to make changes specifically to the highest tiers to account for the differences.For example, because mismatches are much more common and much less fair at high MMR, we’ll limit the roughly top 1% of MMR (Diamond 5 or higher) to solo, duos, or trios. League is a team game, and we want dynamic queue to work for every player who wants to compete, but we’re admitting how impossible it is to find fair matches when fully-coordinated professional teams like SKT are out there lurking in the queue. We’re currently considering enabling 5s for Diamond and above during specific peak hours on certain days of the week--when more players are in queue to make matches.We want to improve things now. We’re also still looking for and working on better solutions. It isn’t only match quality that varies wildly at the top compared to the rest of the ladder. 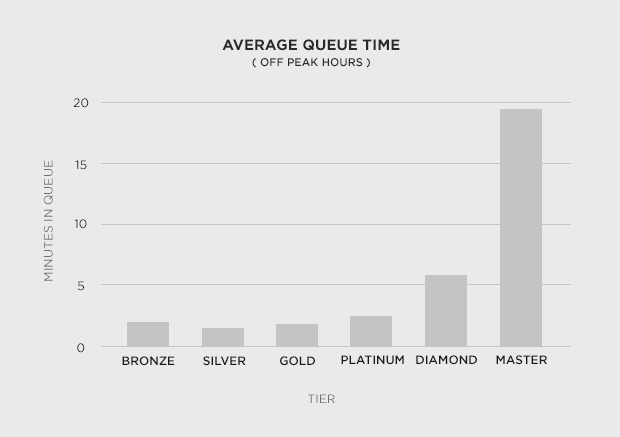 We recently made some behind-the-scenes adjustments to how the matchmaker works, bringing average queue times for high MMR down to 17 minutes (from spikes as high as 30). We still don’t think that’s good enough, but we’ve exhausted our leading options for addressing queue times via this type of algorithmic or other backend tinkering.Position select combined with the smaller player pool at elite MMR is causing long queue times at the highest tiers. We’re going to intentionally make a trade-off here: Scale back on guaranteeing specific roles in order to better ensure high quality matches get made in a reasonable amount of time.To address position shortages, we’re adding an autofill mode that can trigger when queue times are too long. If players enter queue with excessive estimated wait times, the matchmaker will potentially assign them a role other than the two they selected.The matchmaker will continue to optimize for primary and secondary positions, falling back to fill only when necessary. We’re looking to minimize the number of players that’ll end up filling, but it will happen most often at highest tiers.

We know the dynamic ranked experience has been painful for the highest skilled players for the last few months. We remain focused on improving it and agree the current state is unacceptable. The video and this wall of text is another step we’re trying to take towards more clear and frequent updates. We’ll follow up with more data and results from our upcoming changes, sooner rather than later.GLHF, and we’ll see you on the Rift.